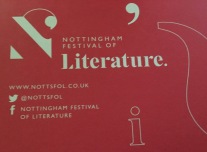 Voices of Jewish and Muslim Writers at Nottingham Festival of Literature raised interesting questions about writers’ uses of language, form and choices of subject. Iranian born Michael Merdad Zand Anchian’s fine poems from The Messier Objects (Shearsman 2015) used open, cut off endings, leaving the audience with questions to answer and ideas to pursue. His eloquent, if sadly all too short response to a question (due to somewhat heavy-handed chairing of the event) reminded us of how political regimes use language as a means of dividing people. He gave an example of how mispronunciation of the French word persil (parsley) in the Dominican Republic could lead to death. He spoke too of the challenge that writers face when presented with language or wider cultural frames of reference to draw on in their work. Should you unspool the spaghetti or mash it up? Bengali poet Shamin Azad switches between English and Bengali in her work to fortify her, give her courage as a second language speaker. Widely published Yvonne Green (who lives in Hendon and Herzilia) raised the question whether new life can ‘be complete without old storIes.’ Kurdish Iraqi poet Shie Raouf (a late stand-in for the much missed Amir Darwish) performed a newly drafted poem about impossible lines, of opposition and connection between her and her experiences: ‘I am not a line you can draw’. She wants to express her truth through language and ‘to share our stories with you’. Her poem ‘Number’, about the 19 women who were burned to death in Yazidi cages, was a particularly chilling example of this. She and the other poets have powerful stories which must be shared, must be listened to.

Sue is a poet, Associate Professor in Education at Nottingham Trent University and a Fellow of the Royal Society for the Arts. What They Left Behind, her third full poetry collection was published by Shoestring Press in 2018. View all posts by Sue Dymoke

This site uses Akismet to reduce spam. Learn how your comment data is processed.