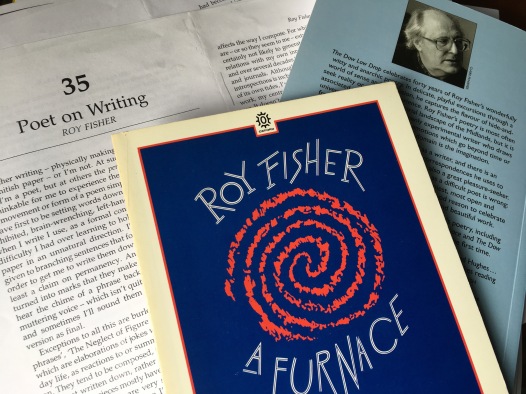 It was Roy Fisher’s funeral in Macclesfield this afternoon. I was very sorry not to be able to attend and wanted to mark the occasion in some way. Roy was a great poet, teacher, thinker, jazz pianist and all round good guy. He has a huge following among fellow poets for good reason. His work is like none other and he has influenced so many writers.

I first met Roy nearly 30 years ago when he was co-tutoring on an Arvon Foundation poetry course at Lumb Bank with Liz Lochhead. Ian McMillan was the guest reader. At first I felt intimidated by Roy. He had an ability to cut to the quick in a conversation about draft poems and a dry sense of humour that took me a little while to catch on to. However, it soon became clear that the specific advice he offered and his whole take on what it means to write poetry would have a marked effect on me as a both a writer and a teacher. That memorable week was filled with laughter and serious discussion about poetry. He had no time for for poems about art which served no purpose beyond superfluous description and we had a number of lengthy chats about this and other topics. Over the years we kept in touch sporadically to share thoughts and frustrations about poetry and teaching.

Roy Fisher wrote poetry with economy, precision and humour which has a timeless and often absurd quality. His observations about industrial landscapes, music, the machinations of the Arts Council, nationhood and many other topics are all permeated with a recognition that you need to be brave as a writer, to take experimental risks, play with language and take your reader to a place where they might see things differently, want to know more and even laugh. Here is a link to a poem in which he does just that. Poetry Promise was performed in 2010 during his last reading in Nottingham at the Flying Goose, Beeston.

In an interview ‘Poet on Writing’[1] Roy once said ‘I’m either writing – physically making a creature of blackish marks on whitish paper – or I’m not. At such times I’m willing to admit that I’m a poet, but at others the persona doesn’t exist.’ In his later years, increasingly housebound and reliant on a network of friends to share afternoons of poetry and music talk, to transport him to readings or hospital appointments, he endeavoured to find ways to keep this writer self alive. He leaves us many fine collections and a great legacy. Contemporary poetry is a much sadder place without him.

Sue is a poet, Associate Professor in Education at Nottingham Trent University and a Fellow of the Royal Society for the Arts. What They Left Behind, her third full poetry collection was published by Shoestring Press in 2018. View all posts by Sue Dymoke

This site uses Akismet to reduce spam. Learn how your comment data is processed.